Purple Martins are perhaps the best known and loved of the “backyard” birds. Their gregarious nature, gurgling call and graceful flight make them popular wherever they are found.

Purple Martins spend the winter in the Amazon River basin, including parts of Brazil and Bolivia. They are among the earliest migrants, returning to the United States as early as mid-to-late January.  Purple Martins feed exclusively on flying insects and time their return to coincide with increased availability of the food supply. 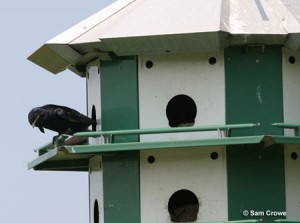 Purple Martins begin to arrive in New York as early as March, with April being more common.

They are a unique species in that east of the Rocky Mountains they are almost totally dependent on human-supplied housing. Native Americans began providing Purple Martins with gourds for nest sites over 1000 years ago.  As generations passed, the Purple Martins became more and more dependent on human provided housing. In the western U.S. and Mexico martins continue to nest in woodpecker holes and other natural cavities.

Male and female martins cooperate equally in building the nest out of mud, grass and twigs. Green leaves inside the nest are common. The female lays two to seven pure-white eggs at a rate of one egg per day (4-6 eggs is average). The female incubates the eggs for approximately 15-16 days before they hatch. The young leave the nest after about 28 days and continue to rely on their parents for food for an additional 2 weeks.

Purple Martins are air borne consumers, eating only insects which they catch in flight. Their diet is varied, including butterflies, dragonflies, midges, mayflies, grasshoppers, leafhoppers, June bugs, moths, cicadas, and bees. They typically feed between 100 and 200 feet in the air.

Attracting Purple Martins
If you are interested in becoming a Purple Martin landlord, here are a few MUST DOs.

1. The martin house must have at least 40 feet of free air space around it or the martins will not use it.

2. Best results are achieved if the martin house can be located within 140 feet of a home or building.

3. Martin houses are pole mounted, using either a gourd or apartment house. You must be prepared to monitor your house and remove House Sparrows and starlings that are trying to nest. The best style poles systems have a pulley or other arrangement for easily raising and lowering the nesting area.

4. Do not put up a martin house unless you are committed to monitoring it and removing House Sparrow and starlings that might attempt to nest.

5. Maintain written records of number and estimated age of young. This will help you watch for losses from predation. Be prepared to add a predator guard if necessary.

Check the housing and attracting pages for additional information.

There are over 9,500 species of birds in the world. Scientists generally group them into 30 categories.